Are painkillers curbing your gains?

Do the painkillers often taken to combat post-exercise inflammation, soreness or injury, actually impact the strength/hypertrophy adaptations athletes are striving for?

Exercise-induced muscle damage (EIMD) is commonplace in individuals after completing a bout of exercise, particularly one which involves a higher amount of eccentric contractions. It is often more prevalent in individuals unaccustomed to a particular level of exertion or movement pattern. The most commonly described symptom of EIMD is that of muscle soreness, a phenomenon that was first described back in 1902 as delayed-onset muscle soreness (DOMS) (1). DOMS is identified by both muscle soreness and from a physiological level by increases in inflammatory markers in the blood and the injured muscle, along with an increase in muscle proteins (2).

A common treatment often used to alleviate the symptoms of EIMD and expedite the return to normal physical function is the consumption of nonsteroidal anti-inflammatory drugs (NSAIDs). The use of NSAIDs is widespread with an estimated 30 million people making use of them on a daily basis (3). Additionally, as NSAIDs are not currently classified as doping agents in elite sports, numerous studies have shown their use to be commonplace in both recreational and elite athletes (4). One study investigating the use of medication in professional football tournaments revealed that over half of the players in the FIFA World Cup used NSAIDs at least once during the tournament (5). The use of NSAIDs in professional sport has been suggested to be underestimated since their use is either self-medicated or prescribed by coaches and typically not included in published literature (4). This raises the question as to whether these drugs impact the strength/hypertrophy adaptations these athletes are striving for, whilst simultaneously combatting post-exercise inflammation, soreness or injury.

Over half of the players in the FIFA World Cup used NSAIDs at least once during the tournament.

What are NSAIDs and how do they work?

The most common pharmacological method suggested for many NSAIDs to elicit their analgesic and anti-inflammatory activities in vivo is by inhibiting the activity of the cyclooxygenase (COX) enzymes, a process that gives them the term COX inhibitors. The COX enzymes have been shown to exist as three different isoforms, termed COX-1, COX-2 and COX-3, although only the COX-1 and COX-2 isoforms have been found to exist in skeletal muscle (3,4,6).

These COX enzymes are responsible for the biosynthesis of prostaglandins (PG) from arachidonic acid (AA) catalysing both the cyclooxygenase and peroxidase reactions (7) (Figure 1). The resulting PGs, particularly the prostaglandins PGF2α and PGE2 are proinflammatory, and once produced are released from the cell where they interact with G protein-coupled receptors on the outside of cells and mediate the typical bodily responses to inflammation or tissue damage (3,7). Thus, by inhibiting the function of the COX enzymes, NSAIDs effectively attenuate production of these resultant proinflammatory PGs thereby eliciting their anti-inflammatory response. 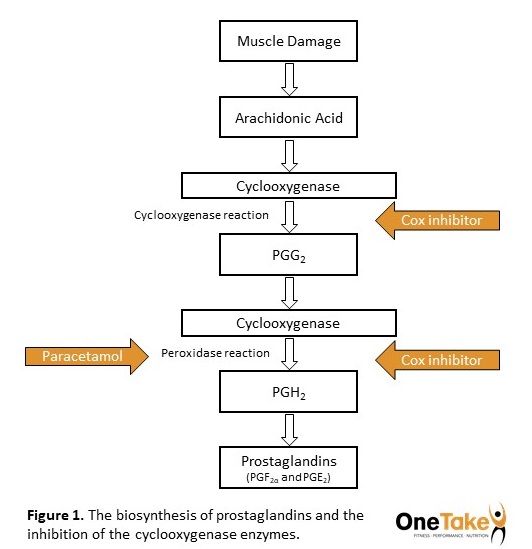 Although the underlying mechanisms are not fully understood, a frequently documented response to EIMD is the activation of the enzyme phospholipase A2 in the damaged muscle tissue (2,8). This enzyme extracts AA from the cell membrane lipids, triggering the COX catalysed production of PGs (7).

The most popular NSAID available without prescription and over-the-counter (OTC) is ibuprofen. NSAIDs are often classified based on their ability specifically to inhibit either COX-1 or COX-2. Those which have the ability to inhibit both isoforms, such as ibuprofen for example, are classified as nonselective (9) whereas celecoxib, for example is a selective COX-2 inhibitor (10). The most common OTC painkiller is paracetamol (acetaminophen). Although not classified as an NSAID, paracetamol has recently become accepted to exhibit similar properties, due to its ability to inhibit COX activity at the peroxidase reaction stage (11).

Implications of NSAIDs for muscle development

Satellite cells are reported to be key contributors to the skeletal muscle adaptations to exercise. These myogenic stem cells lie dormant between the basement membrane and the sarcolemma of muscle fibres. Once activated in response to a stimulus such as resistance exercise they proliferate, ultimately assisting in the repair and subsequent growth of new muscle tissue through the formation of new myonuclei and are thus believed to be essential to achieving the maximum benefits of muscle hypertrophy (12–14).

Protein synthesis is universally accepted to be essential for the maintenance and growth of muscle tissue, with  hypertrophy occurring when the balance of protein synthesis exceeds that of proteolysis (3,23). There is a large body of research supporting the effect PGs have on muscle protein metabolism. PGE2 (24) but more specifically PGF2α has been repeatedly reported to have a profound effect on muscle protein syntheses (6,25–30). As already established, COX enzymes play an important role in the synthesis of these PG compounds. Therefore, it stands to reason that any inhibition of these enzymes and their subsequent PG production would ultimately lead to a degradation in muscle protein synthesis. Many studies have gone on to demonstrate just that, and the consumption of NSAIDs has indeed attenuated the increase in protein synthesis normally seen post exercise (6,25–27,30). Notably, some researchers have gone on to specifically comment that their results were observed using standard OTC doses of the most popular NSAIDs, ibuprofen and paracetamol (26–28).

If COX enzymes play an important role in the synthesis of prostaglandins, then it stands to reason that inhibition of these enzymes would ultimately lead to a degradation in muscle protein synthesis.

It is apparent from the research that NSAIDs undoubtedly have the ability to influence the body’s response to exercise at a cellular level, but how does this translate to real world long-term resistance training adaptations? To date, there are relatively few human studies available that address the long-term use of NSAIDs on training adaptations. Of the limited research that is available, the results in most cases failed to demonstrate any negative impact on muscle hypertrophy. However, as four of these studies were carried out on older individuals (60 to 80 years old) (29,31–33) the results should be interpreted with caution as to whether inferences can be made to the training adaptations of recreational and athletic populations. Interestingly, one of these studies even reported that NSAID users experienced strength and hypertrophy gains as much as 50% higher than the placebo group after 12 weeks of resistance training (29). However, as the participants in this study were in the age range 60-78 years, these unexpected results could be attributed to the analgesic effect of these drugs potentially allowing the individuals to exert greater force or accommodate a higher load during the resistance training interventions, ultimately leading to the increased adaptations observed. Studies on younger populations are limited too, an early study on healthy young adults revealed no significant difference in muscle hypertrophy after a resistance training intervention (34). However, as this study was limited to only 6 weeks it remains unknown whether a longer protocol would have produced any apparent differences. The most recent available study on healthy young adults engaging in resistance training, a population more commensurate with recreational and athletic populations, demonstrated that a maximal OTC dose of ibuprofen significantly attenuated both hypertrophy and strength adaptations and gains following an 8 week resistance training intervention (26).

There is undoubtedly an abundance of evidence demonstrating the ability NSAIDs have to affect the underlying mechanisms of hypertrophy from a cellular level. However, it is clear that evidence demonstrating any negative impact on long term muscle development is greatly lacking, especially in younger recreationally active and athlete populations. A recent meta-analysis investigating the effect of NSAIDs on sporting performance indices was also inconclusive, attributing its findings on a lack of suitable evidence (35). Based on the existing research there is little reason to consider that occasional NSAID use will be detrimental to long term muscle growth. However, the recent findings of Lilja et al (26) does provide compelling evidence that athletic populations and those who are seeking to achieve maximum muscular adaptations, should limit the consumption of anti-inflammatory drugs. Furthermore, as much of the research has demonstrated these attenuations are a result of non-selective COX inhibitors, such as ibuprofen rather than a selective COX-2 inhibitor. Thus, indicating the COX-1 pathway may have a greater involvement with the anabolic responses to exercise (25,36). A need exists for further research to also explore whether a selective COX-2 inhibitor would be more appropriate for these populations.

While you’re here, why not connect with us on our social media channels.